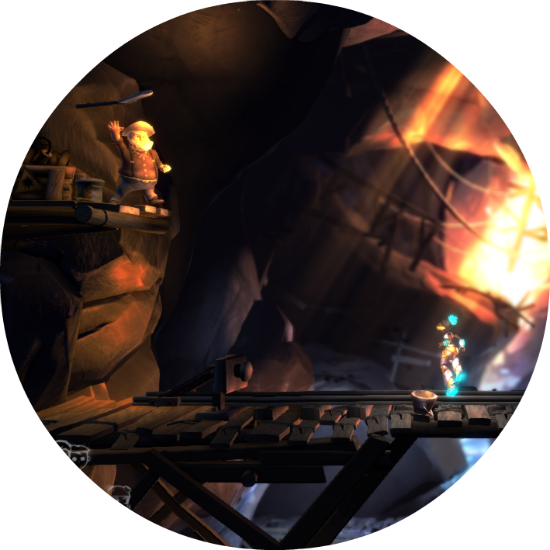 The Cave is a puzzle/platform game that was released in 2013, published by Sega. You can get it on the Xbox Live Arcade, Nintendo eShop, Playstation Network or from Apple’s App store.

I downloaded this from the App store and played it on my desktop.

It’s an interesting story that starts with seven characters on the screen and the amusing voice over tells you about each one.

You then get to select three characters which you will then play with, taking them through the cave.

Each character has an ability that will help them through their section of the game. As you can only pick three out of seven of the characters, you can only explore all the cave if you play multiple times with different characters.

It’s a puzzle game where you click with objects to interact and fit things together, or move things to progress.

It’s a simple, yet visually appealing game with a funny voice over that keeps it interesting.

I’ve only played through once so far and while some people have previously criticised the game for being too simple and relying too much one the visual beauty than the game play, I have to disagree.

But then again, I’m hardly your hardcore gamer, so maybe some of the things I struggled with would have been obvious to others.

Either way, I enjoyed this game, I liked how each character had their own little story line and chapter and the voice over was fantastic – not like something I have heard before in a video game!

This website uses cookies to improve your experience while you navigate through the website. Out of these, the cookies that are categorized as necessary are stored on your browser as they are essential for the working of basic functionalities of the website. We also use third-party cookies that help us analyze and understand how you use this website. These cookies will be stored in your browser only with your consent. You also have the option to opt-out of these cookies. But opting out of some of these cookies may affect your browsing experience.
Necessary Always Enabled
Necessary cookies are absolutely essential for the website to function properly. This category only includes cookies that ensures basic functionalities and security features of the website. These cookies do not store any personal information.
Non-necessary
Any cookies that may not be particularly necessary for the website to function and is used specifically to collect user personal data via analytics, ads, other embedded contents are termed as non-necessary cookies. It is mandatory to procure user consent prior to running these cookies on your website.
SAVE & ACCEPT